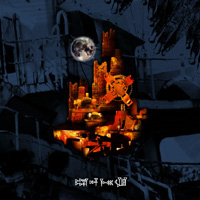 A ritual-industrial dark ambient work based on the fall of the Tower of Babel, the Enuma Elish, Italo Calvino's "The invisible cities" and Babylon as archetype of the City. Texts are spoken in 7 different languages, with the collaboration of Francesco Banchini (ex-Ataraxia, Gor) and Deutsch folk band Pilori.

The CD was originally released in 2003 by Old Europa Cafe, but I, as author and holder of the rights to the recording itself, have decided to re-release it under a Creative Commons Audio License. Thus, the artwork is not free for distribution, but can be browsed at http://www.hablagarmin.com.

Please check out http://www.chaospiral-studios.net for full info on this release and other albums by Morpheus.
1 - When in the height Heaven was not named

3 - Playing with the fire

7 - Praying under the neon lights of Babylon